Do Not Resuscitate David Dix

Before 2020, when the COVID pandemic pushed us all back into our shells. I used to take my son to school on the bus. Most days I would see a familiar face at the bus-stop: David Dix, genial, white-haired, with a cane and a wry outlook on life. We hit it off and got to know each other a little better over months of 10 minute chats. I was intrigued by – and a little jealous of – his travels  in the 1960s, 70s and 80s.   The world was a different place back then and travelling it a real adventure. In the summer of 2019 I volunteered to scan Dave’s slide collection, a record of these adventures. There were 2000 or so – a lot, but not that many – considering they covered 30 years of his life. I have a good deal more on my phone from just the last 3 years.

I used a lens adapter on a DSLR camera which gave pretty good results, and allowed for some enlargement. I then put the results on an old iPad which I took back to Dave along with his slides and a voice recorder. I recorded our conversation as he swiped through the scans, increasingly uncomfortably. He wasn’t nostalgic. He didn’t really want to revisit this period. He explained that he had always struggled with depression until he discovered Buddhism in the mid 1980s. He no longer felt the urge to travel. To fill his time. It didn’t seem like a particularly useful interview. I left and decided that maybe there wasn’t a film to be made of this.

A year later and I found myself without work – because of the pandemic – and stuck at home. I dug out the slides – which I liked – and re listened to the audio. I made an audio edit and put a few images to it. Again I wasn’t sure it was any good. Another year went by before I was visited by a good friend – and excellent editor – John McMullin. I showed him what I had and he liked it. He also made some excellent suggestions, and volunteered to help make the photos look a bit better by creating consistent “slide” masks and coming up with the title screen. I added some music I really liked, which had been composed by my sister, she worked on the track to make it fit. I had a finished film, but didn’t want to send it out into the world without David’s blessing. However it was still plague times, and David was no longer appearing at the bus-stop. I realised that I had also lost David’s address, and he had no phone.

I spent a little time trying to track him down and eventually with the help of another friend spent an afternoon wandering around Bermondsey trying to jog mum memory. I found the correct tower and after a conversation with the tenant management organisation we tracked him down. I left a note for him. I showed the film to David in early 2022, and shot a little bit more with him to add at the end. The final film is here:

It has played a few festivals including the Dreamers of Dream Festival, where David got to see the film in front of a packed cinema audience 5 minutes from his home in Bermondsey.
Amazingly one of audience at the UK Jewish Film Festival recognised David as a fellow passenger on the Penn Overground and wrote to me:

Dear Raj Yagnik,
I have just watched your film, ‘Do not Resuscitate David Dix’ online as part of the UK Jewish Film Festival.  It is a wonderfully entertaining little gem that really captures David’s personal experience reminiscing over his travels.  But when I saw some of the early photos of him I gasped:  in 1971 I went on a Penn Overland bus from London to Katmandu.  There was a David/Dave from Kilburn on the trip who looked and sounded identical.  I don’t recall his surname, but think his Jewish family had originally come from Russia.  When we all reached Kathmandu, the Bangladesh War of Independence between India and (then) East Pakistan broke out, so we were unable to leave.  It was a bit alarming and I ran out of money.   Dave just shrugged, lent me £8 and went off trekking for 2 weeks with a Sherpa guide.  My aunt in London duly contacted his mother and repaid the debt.  (I managed to get on the first plane out, and spent the next 1 1/2 years in Asia, including working in Laos during the Vietnam war which was interesting.)…
She also dug out a sketch she made of David – 51 years earlier. What an amazing and truly heart-warming coincidence. 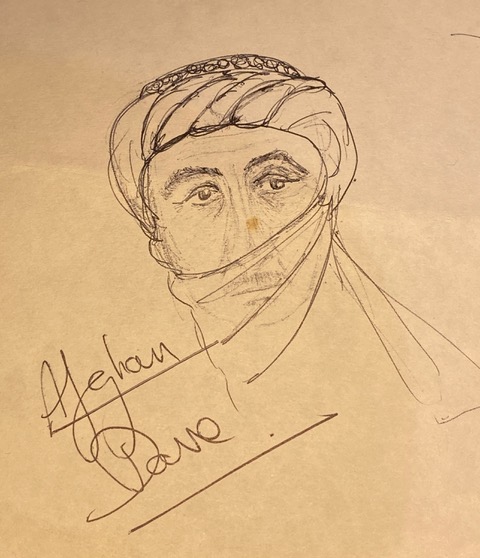